From Digitalisation to Autonomous Processes

In recent years, big efforts and investments have been made in the process industry to drive the digitalisation forward. This has led to extensive improvements in the design, the manufacturing and the operation of separation machines and systems. Huge progress has also been made in the field of simulation of the processes, so that now a prediction of the real performance in real time is possible. Therefore, it seems feasible in the near future to realize autonomous processes by means of a closed control loop, where the process models and the insitu measurement technology are coupled with a process control strategy. It is clear that just reduced order models, abstracted from complex simulations, are necessary to have a ‚faster as real time‘ performance which helps to predict the process in the future. Also insitu characterization devices will become more and more important for the realization of a ‚model predictive control‘ strategy. This not only allows an automatic optimization of the target variables, but also helps to ensure a high resource efficiency according to raw materials and energy consumption. The presentation explains the basics of autonomous processes and their implementation in separation devices like centrifuges. 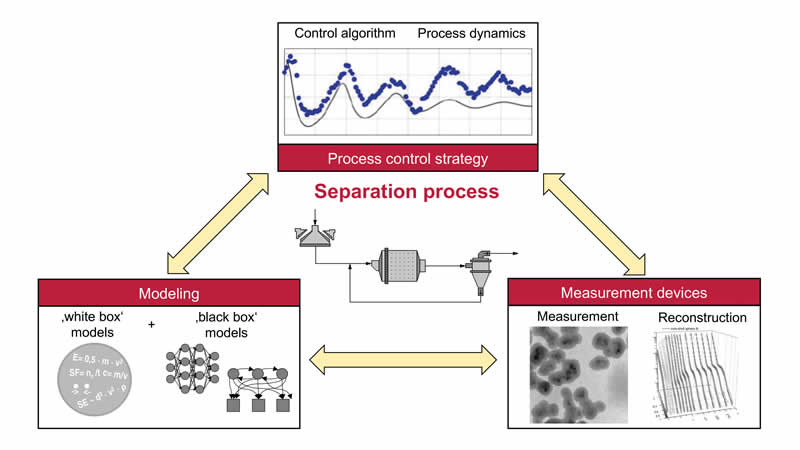 Prof. Hermann Nirschl studied Food Engineering at the Technical University of Munich (TUM) where he received his Ph.D. and habilitation. After his academic education which also allowed him to extend his research at the University of California in Davis, USA, he was head of Process and Apparatus Engineering for the 3M company. In 2003 he entered the Karlsruhe Institute of Technology (KIT). His work is deeply involved in particle technology with a special focus on separation techniques, particle characterisation and simulation methods.

Dept. of Chemical and Biomolecular Engineering – The University of Melbourne / Australia

Mineral ore processing produces tailings at an enormous scale that is increasing with demand and decreasing ore grades. Decreasing ore grades also require additional grinding to liberate valuable minerals, resulting in more fine particles in the tailings. The minerals industry is shifting to dry stacking of tailings to reduce the environmental risk posed by tailings dams. For fine particle suspensions, dry stacking requires high pressure filtration to achieve stackable cake moisture contents, which has the added benefit recovering additional process water. The filter presses required to process tailings at the world’s largest mines push the limits of plate size and minimal handling time to reduce capital and operating costs. However, these behemoths do not solve some of the underlying fundamental problems with filter presses such as batch processing, fixed cavity width, and the use of filter cloths. Cloths need to be regularly cleaned and replaced, becoming waste if they can’t be repurposed or recycled. Novel technologies are required to meet the challenge of economically viable tailings dewatering within a sustainable minerals industry.This presentation will explore some of the challenges of fine particle filtration that face the minerals processing industry. The fine particles reduce both the rate and equilibrium extent of filtration; thus, it is illuminating to explore three lessons learnt from the filtration of wastewater sludges, which are much worse than tailings with respect to compressibility and permeability. Firstly, filtration modelling of sludges shows that optimal use of filtration area and reduction of auxiliary equipment can be achieved using continuous rather than batch filters. Secondly, the filtration path length for a given set of processing conditions and material properties can be very small and will change with material dewaterability. Therefore, thin filter cakes and adjustable operating conditions allow filters to maximise throughput for varying feed, such as when the mineralogy of the ore changes. Lastly, incorporating shear during filtration improves the performance. High-pressure technologies that meet these criteria have the potential to provide the innovation evolution required by the minerals industry. A bonus feature is if the technology doesn’t use filter cloths and thus eliminates this source of complexity, downtime, and waste.

Dr Anthony Stickland is an academic in Chemical Engineering at The University of Melbourne and a Chief Investigator in the Australian Research Council’s Centre of Excellence for Enabling Eco-Efficient Beneficiation of Minerals. He is Australia’s delegate for the International Delegation on Filtration, and council member of the Australian Society of Rheology. He leads ‘The Sludge Group’, who specialise in suspension rheology and solid-liquid separation with applications across many industries including minerals processing, water and wastewater treatment, pulp-and-paper, bioproducts processing, and algae processing. Dr Stickland has developed novel methods for comprehensive dewaterability characterisation of extremely compressible suspensions, produced process models of filters for compressible suspension, and invented novel filtration technologies.

The presentation covers the enhancement of filtration performance by modification of porous media tailored for specific processes of water cleaning. The topic will include methods of filter structure modification by deposition or synthesis of particles on the fibers or granules to obtain a desired added functionality of filtration unit, including antibacterial, photocatalytic or/and adsorption capabilities. The presented applications refer to the cleaning of water from contaminants of recent concern, such as removal of heavy metals, pharmaceutical ingredients and prevention of microorganism colonization. This problem observed commonly in many applications can lead to a rapid clogging of the filter due to bacteria growth and reemission of these microorganisms due to their reentrainment from a biofilm to the outlet. Preventing the bacteria development can also be of a high importance in filters installed to eliminate microplastics, which are prone to bacteria deposition and the formation of biofilm. Other prospective applications like sorption of heavy metals and a novel system of integrated photocatalytic decomposition-sorption of organic pollutants will also be discussed.

Prof. Andrzej Krasiński holds Ph.D. in chemical engineering obtained in 2005 at Faculty of Chemical and Process Engineering of Warsaw University of Technology, and in 2018 the D.Sc. (habilitation) for a comprehensive research on emulsion separation using the coalescence filtration method. Currently he has been employed as Associate Professor at afore mentioned faculty, in Chair of Integrated Processes Engineering (initially in Process Equipment Department). Prof. Andrzej Krasiński is a co-author of more than 40 publications in peer reviewed journals, over 30 conference presentations, and 2 patents. He is an expert of National Center for Research and Development, and past member of IChemE, where he obtained the Chartered Engineer (CEng) status. His research track is related to the separation processes, with focus on the droplets coalescence and separation of gas-liquid and liquid-liquid dispersions, pervaporation and gas cleaning techniques. He has been involved in numerous industrially oriented projects including pyrolysis of wastes, development of filtration products for the automotive industry and for the ammonia plant. Based on past experience his area of expertise covers also aggregation of particles in turbulent

In many solid-fluid separation processes, the dynamical interactions between particles and particles with separation media take place and have a major influence on the separation efficiency and the resulting pressure drop. In depth filtration, the particle separation depends on the collision mechanisms of particles with fibers and local flow conditions in the microstructure of nonwoven. The formation and consolidation of compressible filer cake in the surface filtration are influenced by the adhesive interactions, contact deformation and breakage of particles. Therefore the understanding of microscopical particle interactions in fluid flow is essential to describe the separation processes.

The coupling of discrete element method (DEM) and computational fluid dynamics (CFD) is a very powerful tool for the numerical study of dynamical particle interactions and separation mechanisms in fluid. This contribution first gives a brief overview on the physical contact models which can be used in CFD-DEM. The established experimental methods for the parameter estimation and validation of models are discussed.

The focus is particularly on the description of deformation mechanisms of particles in compressible filter cake. Plastic deformation of soft particles can lead to immense porosity changes of the filter cake, which leads to significantly higher pressure differences during filtration compared to stiff and elastic particle systems. However, only a few contact models for elastic-plastic particles and numerical considerations regarding compressibility can be found in current literature. Therefore, an elastic-plastic contact model was developed, experimentally validated and implemented in DEM. As one of the most important physical and mechanical properties of particles, their restitution coefficients were measured with collision experiments of particles in liquid and air with a developed experimental setup. The effects of lubrication forces and surface morphology on the dynamical contact behavior are studied and considered in the contact model (Figure 1). The nano and tribo indentation methods were adapted for the measurement of the friction and deformation behavior of fine single particles in liquid. The filter cake formation and compressibility were studied with the developed and experimentally validated contact model by variation of the particle properties with respect of the elasticity and plasticity. The micromechanical interactions inside of the filer cake and porosity distribution were analyzed. Moreover, the influence of process properties as flow pressure and volume flow on the filtration process were investigated.

Prof. Sergiy Antonyuk is full professor and director of the Institute of Particle Technology at the Technical University of Kaiserslautern, Germany. He studied Process Equipment and Engineering at the Donetsk National Technical University in Ukraine. In 2004 he obtained his first PhD in ecological safety at the National Technical University Kyiv. In 2006 he received his second PhD in Process Engineering at the University of Magdeburg (Germany) and continued his research in particle technology during postdoctoral period in the group of Prof. Jürgen Tomas. In 2008 he moved to Hamburg University of Technology to work as Assistant Professor in the Institute of Solids Process Engineering and Particle Technology (Prof. Stefan Heinrich). Since 2014 he is full professor at the TU Kaiserslautern. His research covers filtration and separation processes in the liquid and air, contact mechanics and breakage dynamics of the particles and agglomerates, flow behavior of powders, surface functionalization, and simulation of multiphase flow using Discrete Element Method, Computational Fluid Dynamics and other numerical methods.