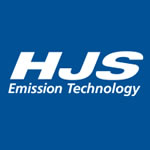 HJS Emission Technology GmbH & Co. KG is a medium-sized company founded in 1976 and based in Menden in central Germany.

HJS has many years of experience and expertise in the field of exhaust-gas aftertreatment.

Some 450 employees are engaged in the development, production and marketing of modular systems for reducing pollutant emissions. These innovative environmental protection technologies can be used either as original equipment or for retrofitting in passenger cars, commercial vehicles as well as in a wide range of non-road mobile machinery and stationary applications. In addition to systems for spark-ignition engines, HJS today focuses on solutions for diesel engines – especially solutions for reducing the emissions of soot particles (particulate matter, PM) and nitrogen oxides (NOx). With its extensive portfolio of patents and cooperation with Germany's TÜV certification agency as well, HJS sets benchmarks internationally. The company's latest development is the patent-pending NOx system SCRT®TM with active thermal management.

More than 2 million m² of HJS Sintered Metal Filter media (SMF®) have been pro­duced over the past 15 years, with a peak production of 300.000 m² p. a. The aim is today to use the known advantages of this thin, pleatable SMF® material, such as sharp separation efficiency at 10 µm or good cleanability, for new industrial applications, like hot gas, liquid and process filtration.

SMF® material is a thin (< 0.4 mm) porous sintered metal in which a precisely defined stainless steel powder is sintered and supported by an expanded metal carrier. This re­sults in a mechanically and thermally highly stable filter medium, which can be pleated similar to paper or synthetic filter media. The SMF® base material is industrially man­ufactured as quasi endless sheet that is wound on a coil. Approved for hot gas and exhaust filtration, the material is further processed into typical filter modules for the named applications.

At the beginning the performance of the current filter medium is described by qualify­ing it in line with the corresponding standards of both oil filtration, e. g. multi-pass acc. ISO 16889 and gas filtration in accordance with ISO 16890 and e. g. VDI 3926.

The multi-pass with A4 test dust gives a DHC of 7.18 mg/cm² @ 10 bar and an effi­ciency e.g. Beta 100 of 9.6 µm. Gas filtration tests acc. ISO 16890 are in preparation and results similar to the known media for APC are expected in derivation from other test results from gas filtration with SMF®.

Based on the results of these investigations the standard SMF® material has been adapted via adjustments of the powder metallurgy pro­cess in three steps from 45% to 50% porosity. As a result permeability increases...