Cologne is Germany’s fourth-largest city and one of it’s dynamic business hubs for international trade representing all business sectors. Within a radius of just 100 kilometres of Cologne, around 17 million people live, more than in practically all the other metropolises of Europe.

Cologne is also an international city. Around 1 million people from more than 180 nations live in Cologne and enjoy the lively coexistence. Cologne is a “multi-culti city” in which 30 percent of the total population come from abroad making the city an international metropolis.

The magnificent Cologne Cathedral hovers above the roofs of the city. It is not only used as a point of orientation but is the pride of the people in Cologne. The panorama of the city has been dominated by the Cathedral’s gigantic pair of towers since their completion in 1880.

Enjoy the unique Rhine panorama of the Old Town with the Cathedral, the Roman church Groß St. Martin and the historical Town Hall. Enjoy a glas of the famous local “Koelsch” bere and take a stroll through the narrow, cobble-stoned alleys by the river Rhine.

From local cuisine to first class gastronomy. Whatever you feel like eating – you can have it in Cologne. Here you will find more than 2000 pubs, cafes and restaurants serving everything.

Travelers to Cologne should enjoy their evening time in a traditional brew house. The brewery, Früh am Dom, is not only geographically the center of the city, but it’s also only a stone-throw away from the Cathedral. 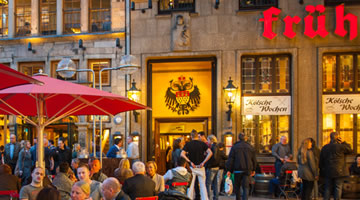 A Kölsch beer is a smooth, light, top-fermented beer. You drink a Kölsch from a so-called “Kölschstange”, a thin cylindrical glass. In Cologne breweries Kölsch is served by “Köbes” who take over the job of the waiter. Tip: “Köbes” serve you one Koelsch after another if you don’t say “no” and put the beer pad on your glass. The Früh brewery is open daily until midnight.

Anyone who orders a “Halver Hahn” in a brewery expecting half of a chicken will be astounded: the Köbes will bring, in a Roggen bun, butter and piece of aged gouda cheese. On top of that one spreads a little mustard. Sounds curious, actually tastes really delicious with a Kölsch. Also the Rhine “Sauerbraten” (marinated pot roast) with raisin sauce, dumplings and red cabbage isn’t missing.

Walking tour with a visit to the Cathedral

This tour presents the most interesting facets of Cologne’s past and present. In addition to visiting the world-famous Cathedral you will receive insights into the Roman colony and the medieval town of churches, merchants and guilds. Further themes during this walking tour are the city’s destruction during the Second World War, its reconstruction and modern urban development as well as the typical Cologne mentality.

Walking tour in the Old Town

Discover with us on foot the area in the vicinity of the Cathedral and Old Town. Many of Cologne’s most important attractions are concentrated within one square kilometre around the Cathedral, including the town hall and the old town with the Romanesque church of Groß St. Martin. In the old town’s narrow cobblestone lanes and lively squares such as Alter Markt, you will get a feeling for life in the Cathedral city past and present.

Cologne’s Schildergasse is the most-visited shopping street in Germany. Just like the neighbouring Hohe Strasse, it accommodates large department stores and branches of familiar brands. Exclusive designer shops can be found on Mittelstraße and Pfeilstraße. 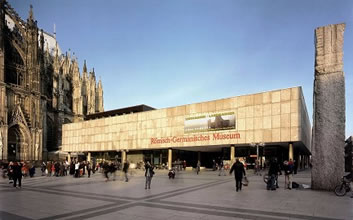 The Römisch-Germanisches Museum is located in the immediate vicinity of Cologne Cathedral. The Romano-Germanic Museum presents the archaeological heritage of the city and the surrounding area from the Palaeolithic period to the early Middle Ages. Among the oldest finds are the one hundred thousand year-old stone tools from the Kartstein cave in the Eifel. Finds from the Neolithic settlement of Cologne-Lindenthal, in which the earliest arable farmers of the Rhineland lived, are internationally well-known. Decorated architectural elements, stone inscriptions, portraits, wall-paintings, mosaics and exquisite tableware reflect life and luxury in Roman Cologne.